The architecture of sacrifice: threshold to the magical cosmos.

Through my work I explore the relationship between physical and mental structures – the built environment and social values. Within my exploration, two subjects are particularly fascinating and fruitful to me. First, what I call “other spaces” – places that distinguish themselves from their surrounding by being or encouraging otherness. Second, the political and philosophical dimension of place-making. Throughout the years I have been working on three distinct scales: individual freedom, community perspectives, and urban policy shaping culture. What I produce and offer are spatial-strategies that empower individuals.

The magical cosmos is a worldview and has nothing to do with card tricks nor a wizard school. Magic facilitates the experience of meaning beyond rationality by activating the individual’s imagination. Opposite to the magical cosmos is what the Italian philosopher Federico Campagna calls the “Technical cosmos” – today’s hegemonic system of reality – especially in central Europe. Technic operates through separating and automating, while magic acts by integrating and transforming.

As a society we are currently facing highly complex challenges. I believe what is needed to answer those challenges are imagination and the willingness to transform; qualities central to the magical cosmos. I share Campagna’s sentiment and feel a cultural imbalance towards technical thinking aiming to create safety and stability which suspends imaginative transformation.

Nature is incredibly complex and is experienced deeply. In the magical cosmos, nature is the life force which connects everything, while technic regards nature as a factor to protect against. Nature’s complexity engages our imagination and all our senses are evolved to perceive its metamorphoses. Therefore, I argue that nature is the ideal threshold between the technical and the magical cosmos. Cities are manifestations of culture and what is present at its center is recognized as culturally important. The city center of The Hague is almost exclusively commercial. It is there, where the threshold should be located.

What I am proposing is a new tradition: the annual sacrifice of one building. Every year one empty or commercial building is selected and acquired by the municipality. The building is broken down, the construction materials and the ground are rearranged on site, inviting nature to take over and establish itself. The façade is the only part left behind as a porous boundary facing the street. However, it is sealed off and only after 10 years the entrance to the new ecosystem is opened to humans.

This tradition is intended to last beyond a century. At first, the center will host a handful of green spaces; later on, they will form connections and clusters. Eventually the structure of the city will transform, from one restricting nature to fragments, into a structure which interlaces the natural ecosystem. 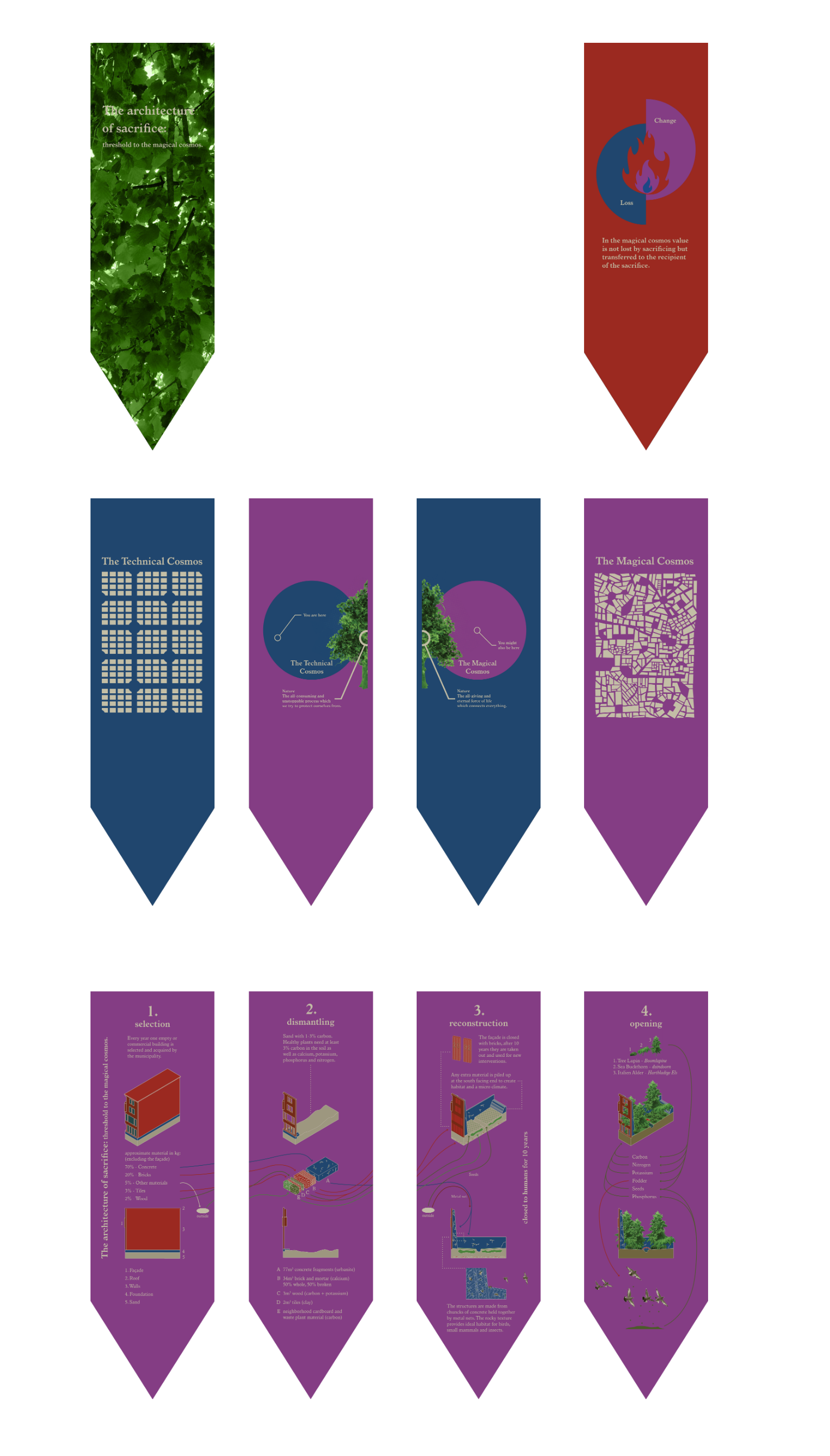